skip to main | skip to sidebar

How wasteful are you ? 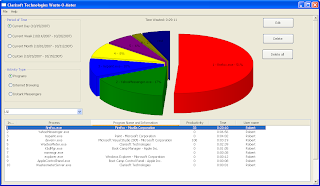 This idea started from my own frustration; I felt many times that I was wasting my time on the computer, who wouldn’t? Consequently, I wanted to exactly know how much time I spend per day/week/month looking at some sites, verifying my email or chatting to my friends. I realize that pretty much every day I have this ritual, I verify 5-6 websites and read their headline. It became such a big habit that I could type the name of one of these sites without even thinking (Bookmark Looping Disordered). Scary, but true.

The whole web industry is about you spending more time in front of the computer, there are many articles about what is the average time one spends on Google, My Space, Yahoo messenger or etc; all these companies are very proud of how much time you spend/waste on their sites. However, if search engines were better maybe people would find what they were looking for faster and hence the time spent would be smaller; Google for instance grew so fat that many times the results returned are irrelevant in relation to queries. Similarly, if someone is spending so much time on a social network maybe he/she doesn’t have a life; does it mean that my space is a place of jobless people?

These are the boundaries of time base analysis, but I am not very interested in this argument. I am more interested in who is on the opposing side of web industry. While the Internet tries to swallow you in spending more time on it is there anything else that does the same in the other direction? Maybe outdoor activities, or family or TV (this one is probably as bad). Like in any system in order to have equilibrium we need to have a counter force, we need a strong a counter industry that tries to keep you off of the Internet. Having said so, I am not going to reveal what the other side is, it may be different for each individual. I prefer to swim, play basketball, read a book or bike. However, I know that is more convenient after a tiring working day to open the laptop and surf.

Waste-o-Meter is the tool that measures accurately how much time one is spending on the computer and how he/she is spending it. You can see exactly how many minutes you spend on browsing Myspace/Facebook, searching on Google or checking email. Occasionally before going to bed I try to summarize things I done during the day, I used to have trouble doing this, of course it was difficult to recall chatting to various friends 2 hours per day, or googling for hours ;-)). It may be because I am senile, and most of the people do recall their Internet/PC time, however for other "senile" people waste-o-meter could be their memento.

After making the first prototype I shared it with my colleagues and they found it useful or at least interesting, hence I decided to share it with everybody and make it free. Who knows maybe someone else wants to see how wasteful they are.

While developing it I realized that it can very well be used to measure productivity as well, duh ..., consequently I spinned this idea off and together with some of my friends I made few products; one may call them evil ;-). The first idea is to make it a parental control tool, this software on one hand measures children’s PC and Internet usage on the other hand it can enforce limits on how much time a program/website, what programs or websites a child can use. A second product was pretty much the same idea but for businesses (http://imonitorpc.com).

In a century where people start losing their social skills and the trend is to turn everything into online businesses, waste-o-meter is the scale that measures your PC/Internet “weight”. It is not a secret that our generation is fatter then the older one, similarly this generation is also an excessive consumer of PC/Internet related products. I decided to start with a scale and later who knows I may come with exercises or drugs that cure such an endemic disease ;-)). I’m actually thinking that my next project will be a social network site for people who have a life.

(some more things to be fixed)

a) on remove (old)/ install (new) version, old stats are lost! (should be prompted: do you want to remove also the data files (stats)?

b) uninstall screen is still labeled as "install", might create some confusion there

why is the install file so... suspiciously big? 8MiB seems too much for this kind of a utility... or is that because of using .net?

the idea itself is very appealing! it might be a good idea to set up a mailing list for newer versions, bug reports and (sometimes) useful user suggestions.

The biggest file in the installer is ~urlcategory.dat (~4 MBs), everything else is the beauty of Windows ;-)). If your next question is what urlcategory.dat does, it maps a site to a category. I actually wanted to have more sites there but the installer grows fatter (~32 bytes per URL), so I decided to have only around 100k.

I am planning to keep this blog for bug reports and user suggestions. However if it somehow becomes really popular, I will create a forum for it.

Nice software.
I see you're running Windows on a Mac...
Is the OS X version coming soon? :)

check out "lumea pe cal" by http://razvan.exarhu.ro/
it might give you some real idea abut human life!

This is a nice tool :-)
Some good features would be:
- Don't just show the wasted time, bu also the amount of time you have been productive.
- Easily see yesterdays stats.

1. Seby - So far I don't have plans to port this software on mac OS platform, however, who knows, I may do it in the future.
2. I will display also the productive time, even though the software is called wasteometer ;-), I think it makes sense, somehow.
3. If you want to see yesterday's stats u can choose a custom interval. I will consider adding this feature if more people request it.